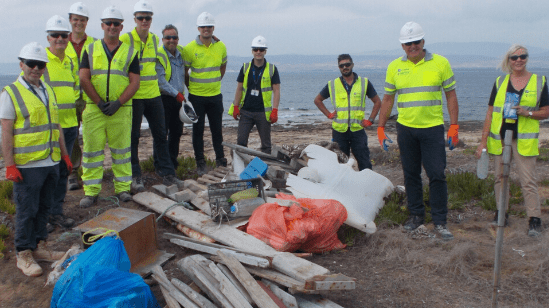 Colleagues working in Cyprus took to the beach to carry out the huge task of cleaning up a special area of conservation.

The stretch of coastline they cleaned is home to numerous protected species, including Elenora Falcons, European Shags and it’s also a nesting site for Sea Turtles. Over time the beach had become littered with rubbish and washed up shipping waste.

25 NG Bailey colleagues took part in the clean-up and together collected 6,600 litres of waste, including a significant amount of plastic, polystyrene, fishing nets, shipping rope, half a windsurf and a giant inflatable flamingo. The team also recovered a lot of drift wood and pallets, which we will be used to construct habitats for bees and reptiles at a later date.